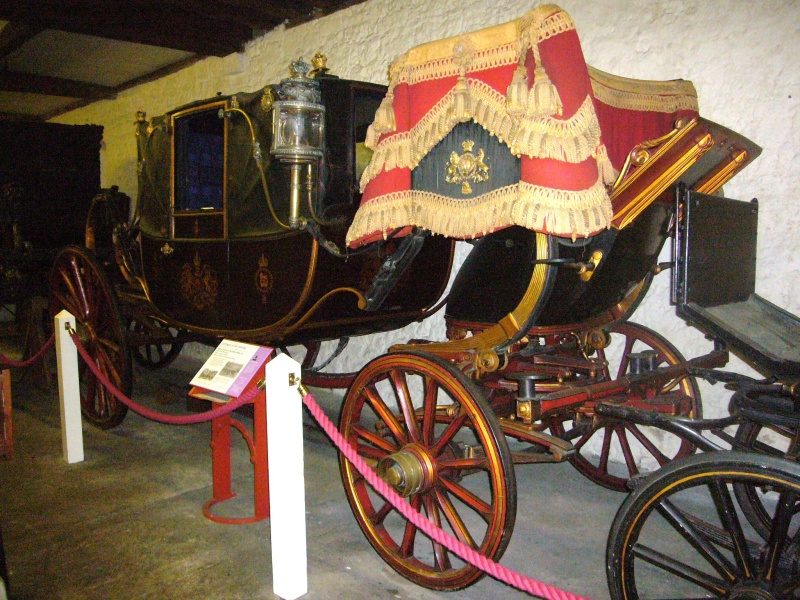 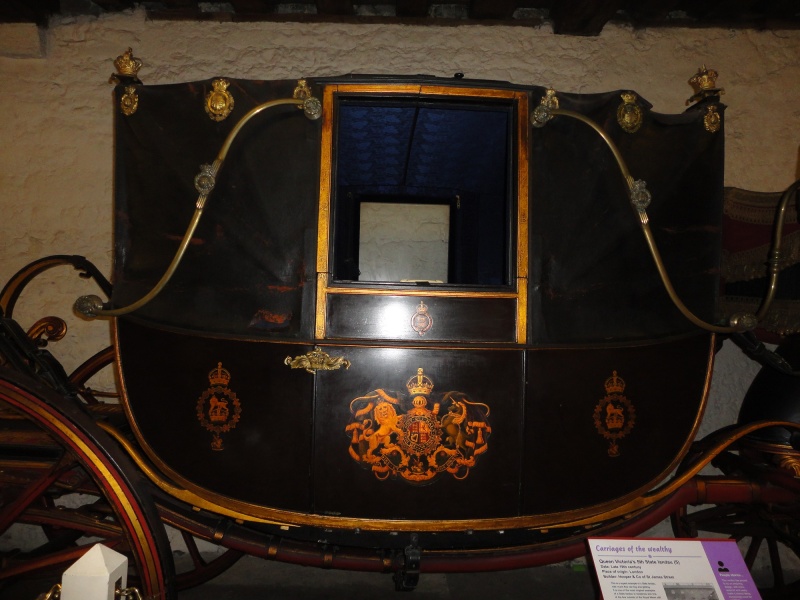 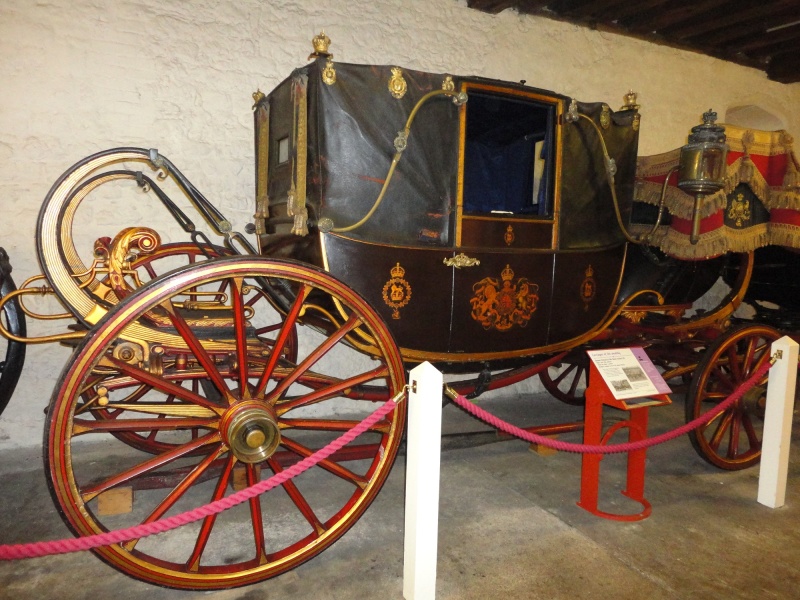 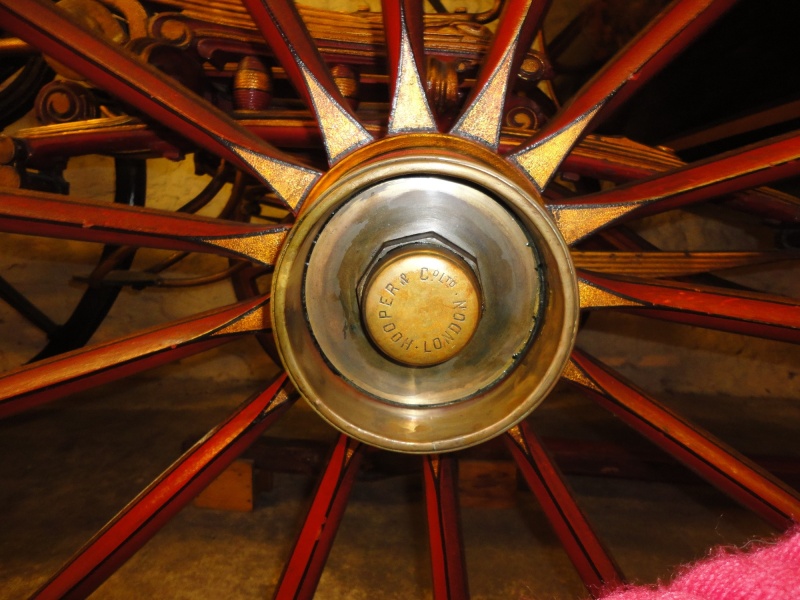 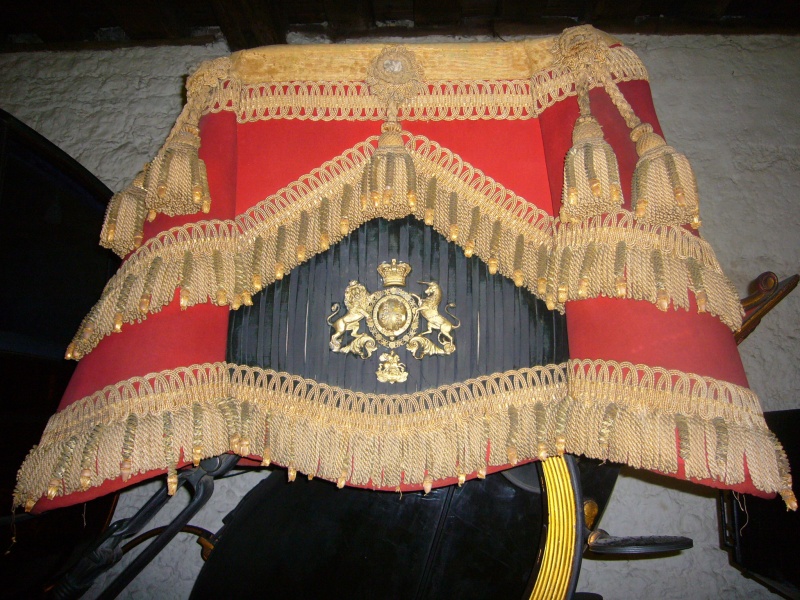 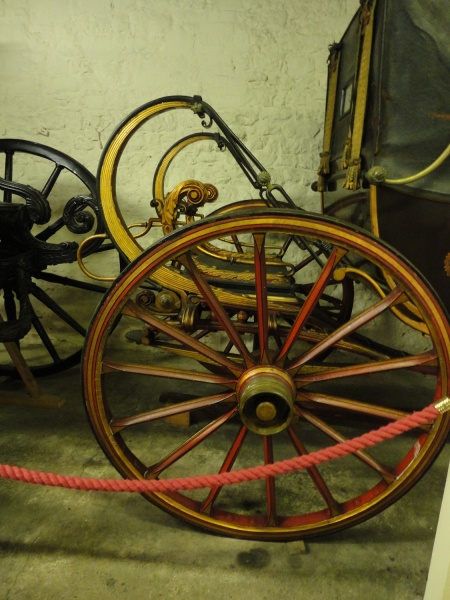 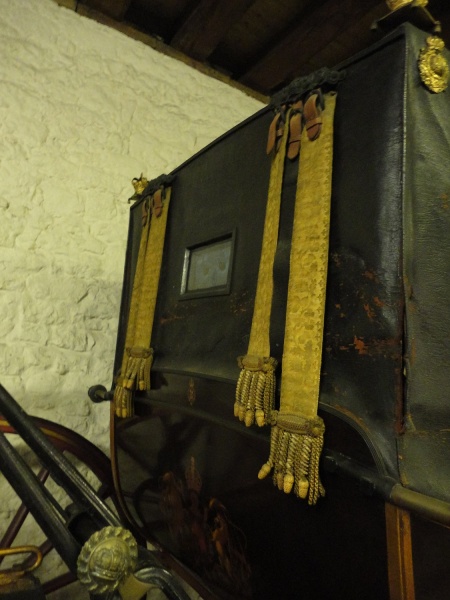 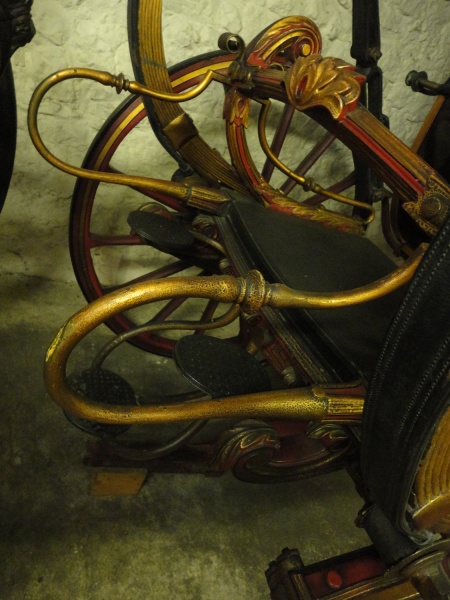 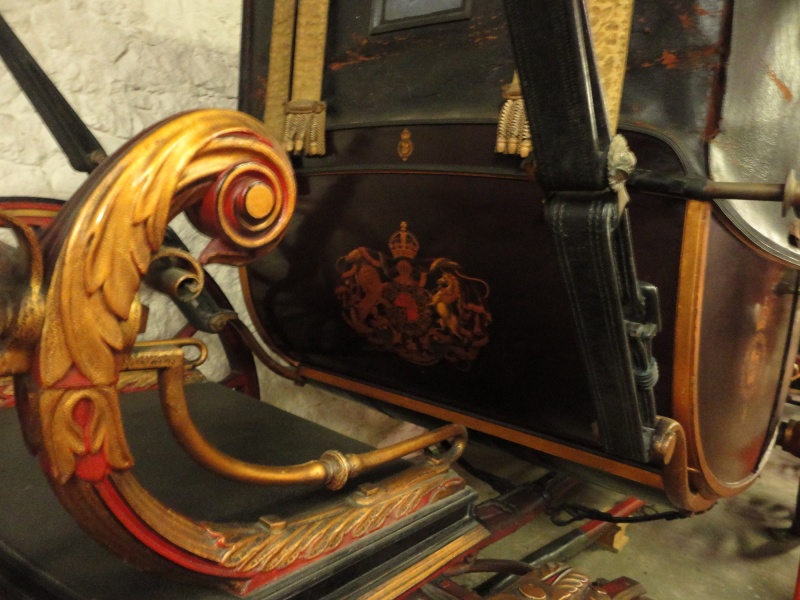 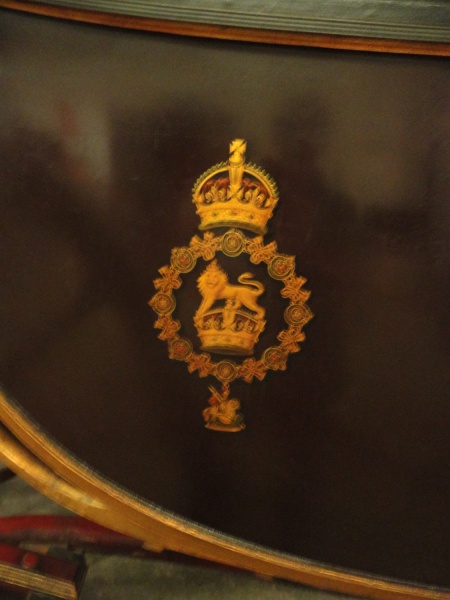 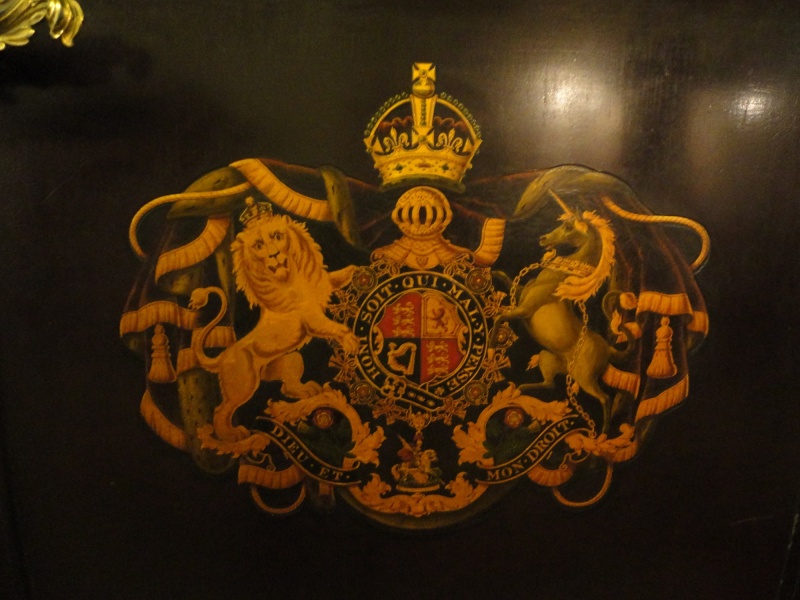 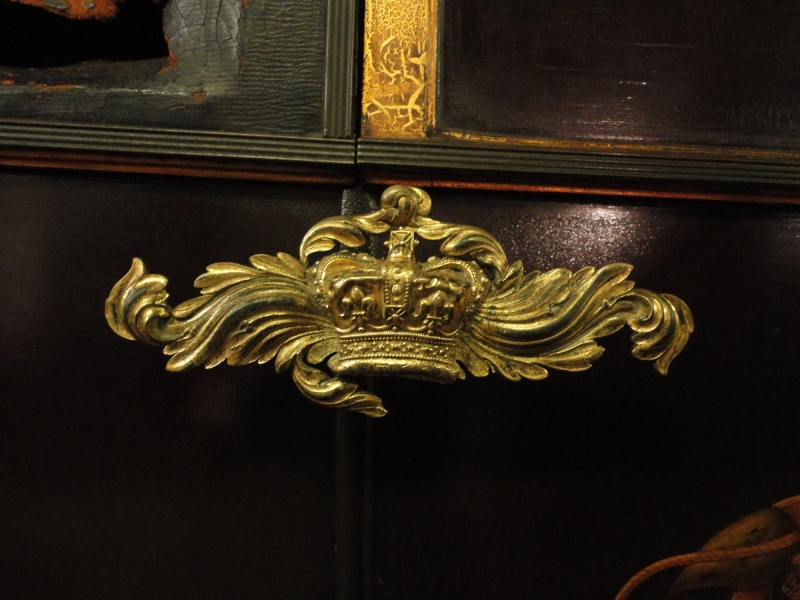 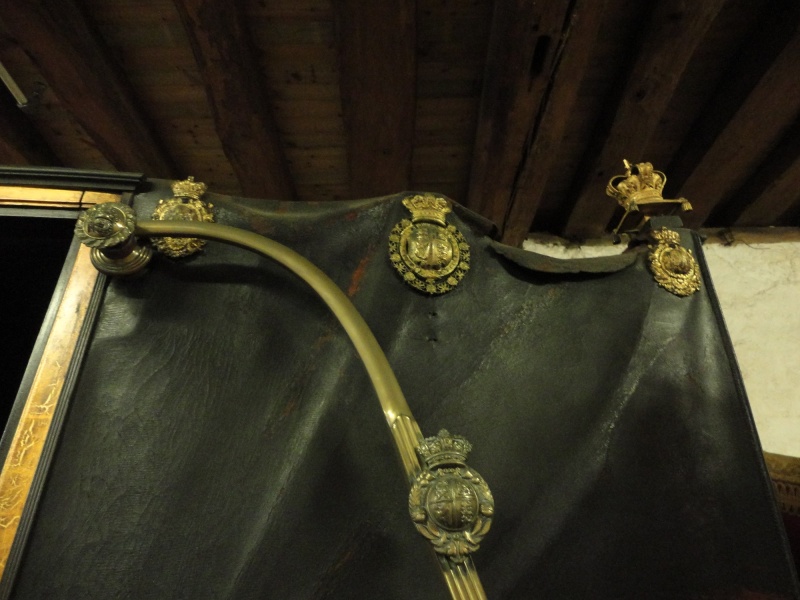 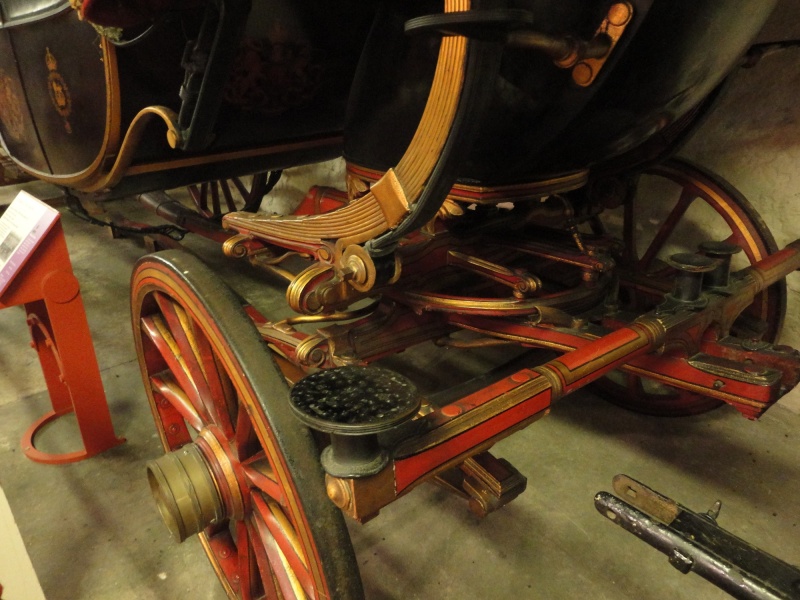 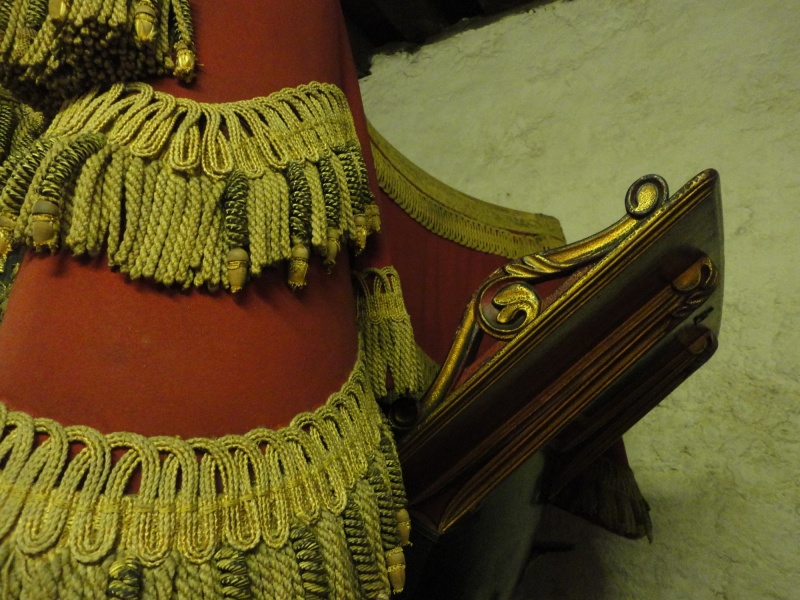 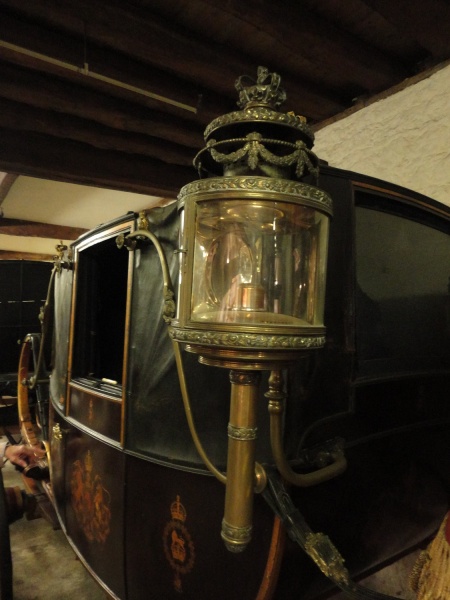 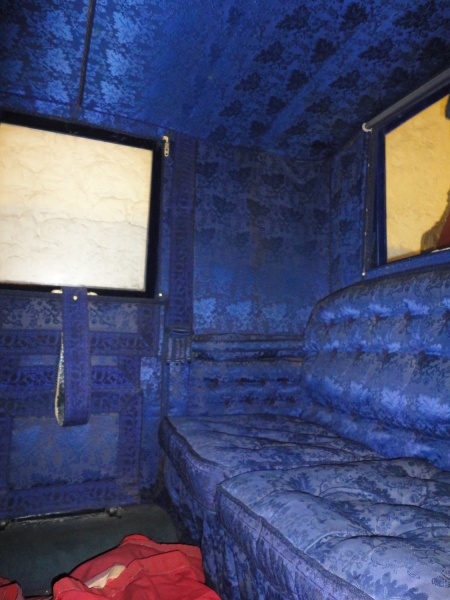 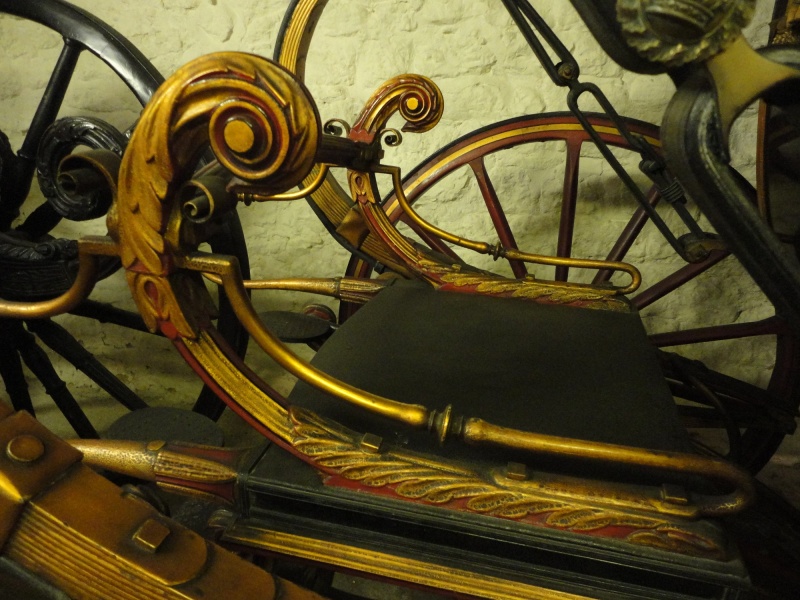 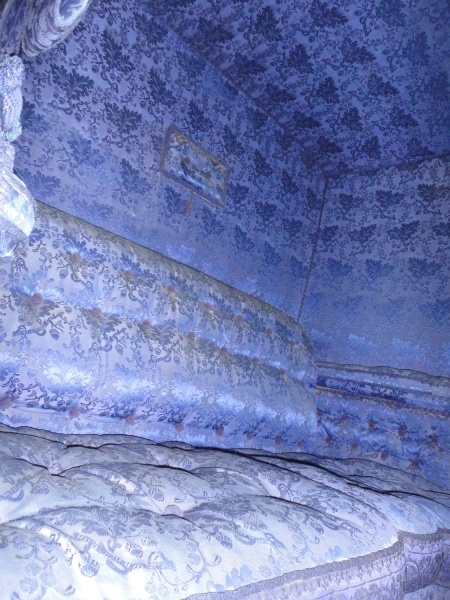 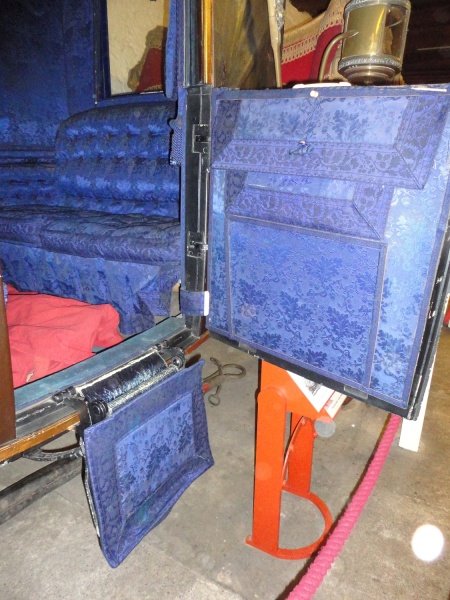 Built by Hooper and Co this is recorded as being Queen Victoria’s 5th State Landau. It is a superb example with fine carving and gilding and is one of the most original examples in existence. Landaus such as this one are still seen on state occasions, drawn by up to six horses with the front leader horses being ridden postilion and the wheeler and swing (middle) horses being driven by a coachman.

This is a well travelled carriage. Following its purchase by the Science Museum is was on show in an exhibition in Japan. A much restored State Landau was recently sold to Japan, otherwise they are an uncommon sight outside of the Royal Mews.

A magnificent example of a State Landau. This carriage was used by Queen Victoria. There are a number of other State Landaus still within the Royal collection that are used on a regular basis. This example has retained the majority of its original paintwork where as those in the Royal Mews have been maintained and repainted over the years.

State Landaus are large carriages pulled by a team of four or six horses. The body of the carriage is deep and is supported on curved dumb irons that are attached to the enormous C springs via double spring braces that are shackled together at the centre. The leather head is adorned with Royal heraldry. Along the top edge are six gilt mounts, on each side, with the Royal Arms. A gilt metal crown surmounts each corner of the roof and there are further Royal Arms on the hinges and ends of the folding head arms. In Landau fashion the head folds down to the front and back. On the back of the head are footman’s holder’s. These consist of two laces in gold broadlace with an acorn design. One is slightly shorter than the other and they are finished in the most beautiful fringe of gold and cream with silk covered wooden acorns. They are attached via brown leather straps to very elaborately cast staples. In between each of the gold laces is a plain blue cotton holder also with a brown strap. Sway straps with cast buckles are fitted to the lower end of the head arms.

The doors are hung on concealed hinges. They have a cast gilt handle with the Royal Crown in the centre and acanthus leaves to each side. There are lowering windows in each door with frames covered in blue cloth. Inside the upholstery is what one would expect of a 19th century Royal carriage, Royal blue silk with an oak leaf design. Every surface is covered with the same stunning material. The laces are in the same colour with a similar oak leaf design to that of the silk. At the large rectangular window in the front of the leather head is a blue silk roller blind. A small rectangular window is in the back of the head, this has a silk covered squab. To access the carriage are folding steps on each side with blue silk covered backs. All of the interior furniture is made of bone.

The front of the carriage has a Salisbury boot which supports the coachman’s seat. The seat is covered with a hammer cloth with a red box cloth ground material. The lower side panel is covered in blue pleated silk and has a gilt metal Royal Coat of Arms in the centre. The fringing is in gold with drops that finish with an acorn. Much of the silk on the drops has disintergrated but the rest of the fringe and the red box cloth has stood the test of time well.

The coachman’s footboard is quite steeply angled and, as one would expect from such a top quality builder and for a Royal carriage, is finely carved and finished. The supporting mounts on the underside have stylised foliate design ends. On the topside of the footboard are carved foot supports with an acanthus leaf design.

To mount the coachman’s seat there is quite a hefty step bolted to the Salisbury boot. It has a circular plate with a jagged edge. The roller bolts on the splinter bar have jagged top sides. The splinter bar itself sits on top of the futchells. All of the fore carriage is carved with spiral ends and despite being top quality, it is substantial and perhaps not the most elegant of carriages in appearance. The perch is compassed down to follow the underside of the body of the carriage and has iron staples half way along to which leather sway straps are attached.

At the rear is a footman’s platform covered with leather. The standards and cross bar are richly carved with acanthus leaf motifs. Big pump handles swing out the back and give support to the footmen whilst they mount the platform via the steps at the back. The steps have a lower central step with a circular jagged plate, itis supported by a curved bracket attached to the hind carriage. Then, to each side, elegant curved arms support further steps on each side, these also have circular jagged steps.

This carriage retains its original lamps that are on fixed brackets. The lamps are elaborate with cast edges to the edge of the single tiered chimney and around the cylindrical frame. The candle holder has cast collars. Just beneath the chimney is a garland of oak (?) leaves and a Royal crown surmounts the lamp.

At the front of this Landau are 12 spoke English pattern wheels with iron tyres, there are 14 spokes on the rear wheels. The carriage has collinge patent axles and straight axles. The wheel hubs and axle caps are in brass.

Many large quality built carriages are ‘eight sprung’ with C and under springs as this carriage illustrates. The extra springing ensured amore comfortable ride which was especially important when the passenger was the monarch. The C springs on this Landau are enormous and are kept tight with a ratchet mechanism.

All Royal Carriages, including the motor cars. Are painted in a deep burgundy. State carriages such as this one have a scarlet under carriage with gold and black lining. The C springs and pump handles are painted gold and the Salisbury boot is painted black. On each door is a large Royal Coat of Arm. Two smaller cyphers are on the side panels to each side of the doors. One the back panel is again a large coat of arms and a much smaller cypher above. Another large coat of arms is painted on the front panel.

This carriage is in largely original condition. The paintwork on the body and wheels looks original as is most of the that on the undercarriage. The C springs seem to have been touched up at some point which is not unusual as the spring leaf’s move and cause the paint to crack. The painted heraldry is in super condition. Paintwork has flaked here and there and it could really benefit from consolidation.

The leather head has a few holes and tears. It is fragile and if ever lowered great care should be taken to avoid further damage. The hammer cloth is in fairly good order in terms of the backing cloth. The fringe is also good but the silk is missing from almost every hanger. It is rather dirty. Inside the interior is in super condition.

Continuous conservation cleaning and monitoring recommended for this State Landau.