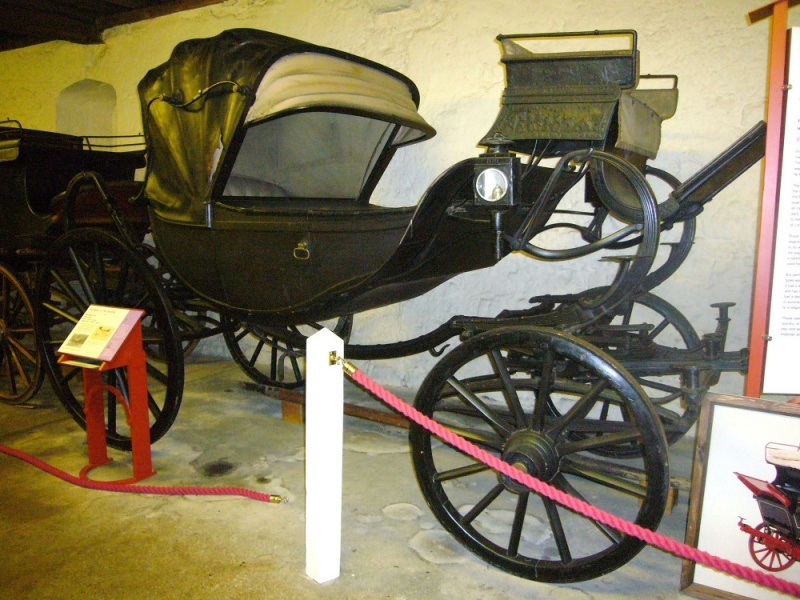 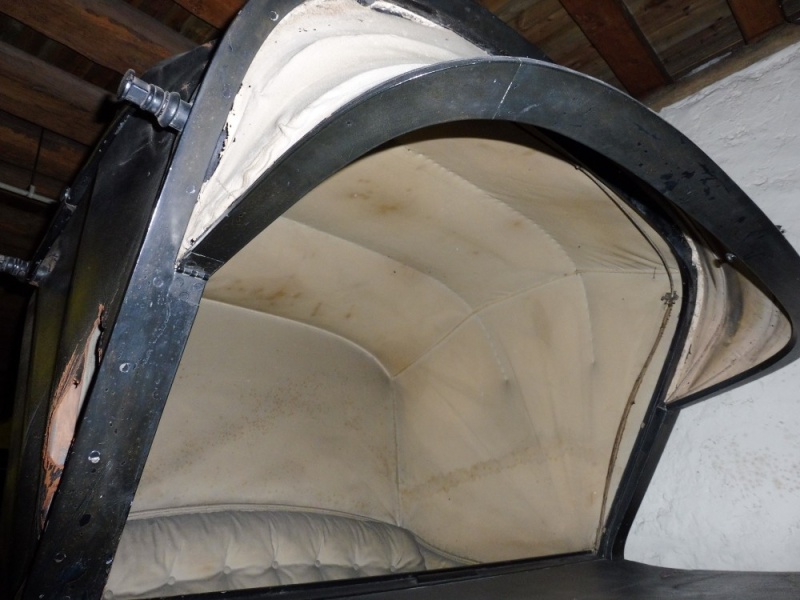 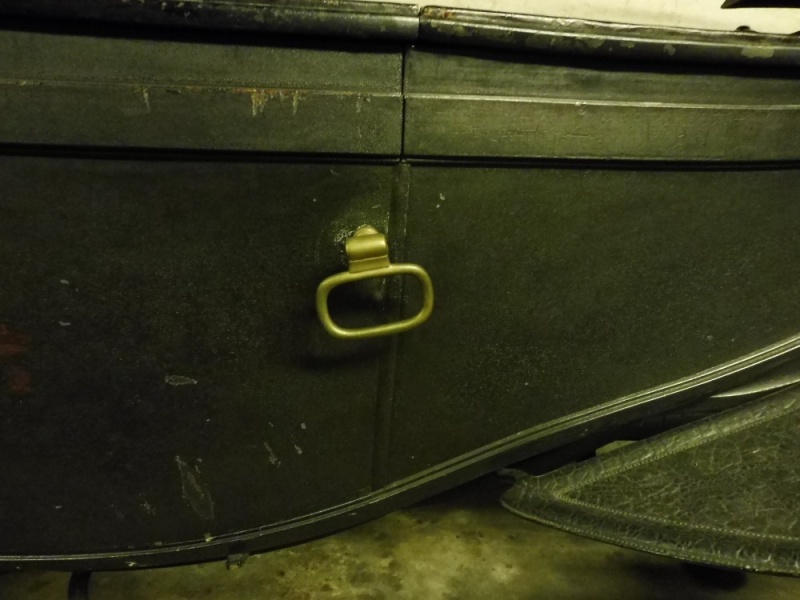 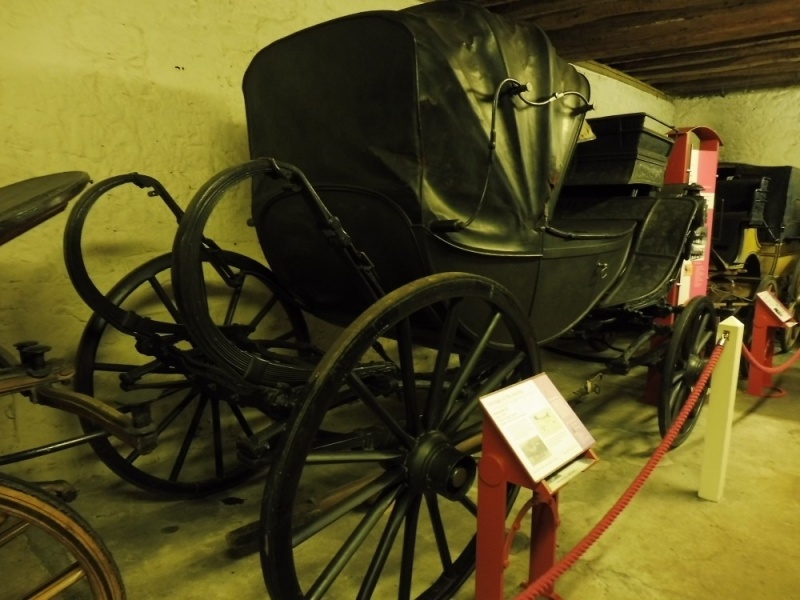 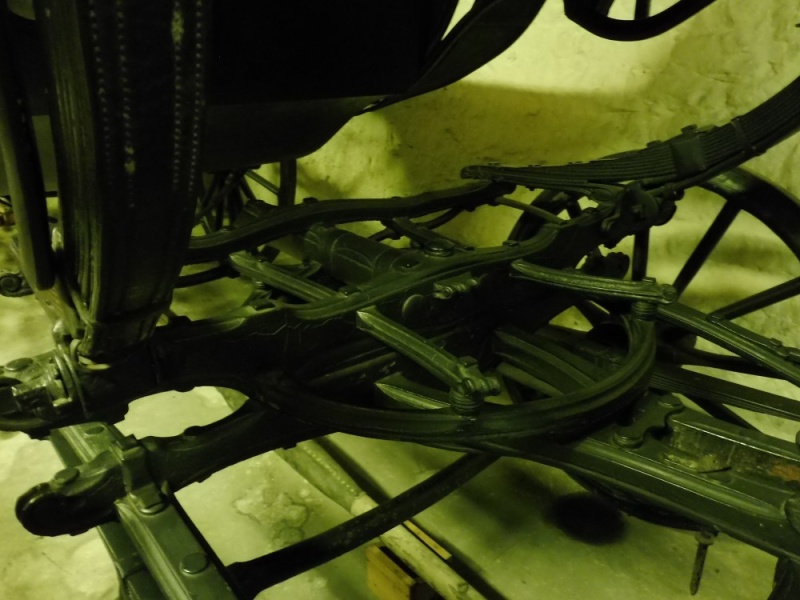 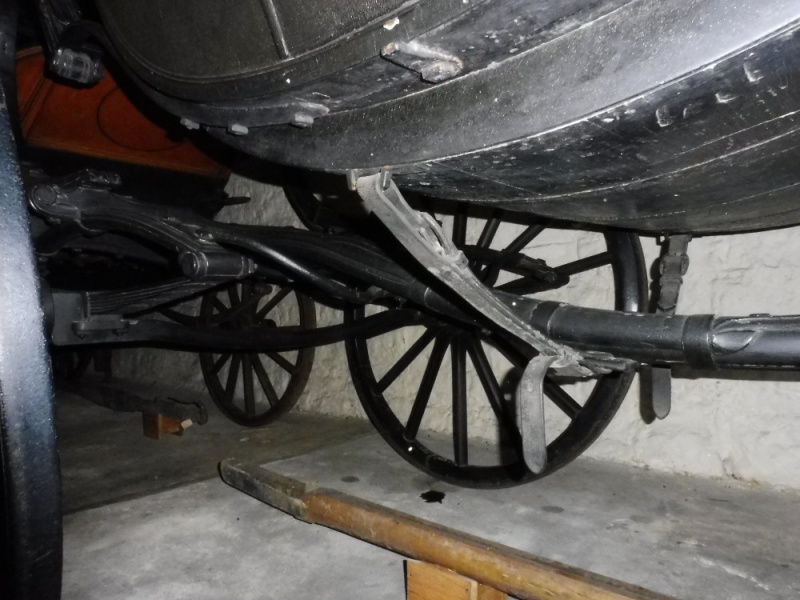 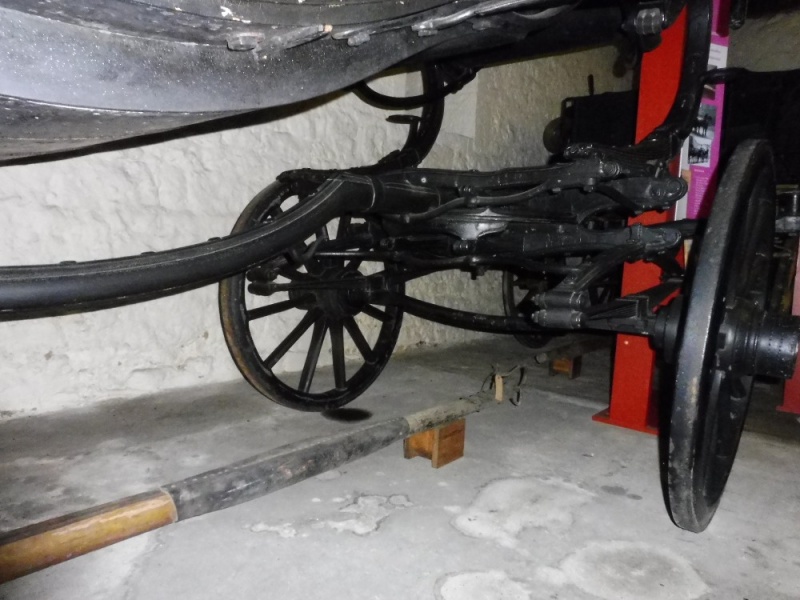 A carriage for taking pleasure drives in around parks with seating for two people. This Barouche has a leather head to protect the occupants from the weather, a folding wooden cover over the body and is sprung on C springs. Built by Peter's and Sons of London.

The Barouche was introduced from Germany at the turn of the 19th century, and were then known as German Wagons. These early barouches were heavy versatile carriages, often used for travelling as well as everyday driving. After the railways made travelling carriages redundant in the mid nineteenth century, the barouche became the ultimate park vehicle for taking the air and seeing society and, perhaps more importantly, being seen. Park barouches had bodies much shallower than travelling one - better to be seen in. A barouche is superficially similar to a landau but, whereas a landau has two heads which completely enclose the body, a barouche only has one, over the principal seat at the back. The front  seat is covered by a knee flap, which was closed in bad weather, but could behinged up to form a seat back for this additional seat in fine weather

A park Barouche with a curved profile to the underside. The side panels have a beading to the outside edges that accentuate the shape of the body of the carriage. A folding wood cover provides protection for the occupants during inclement weather. When not in use it folds up neatly to the front of the body of the carriage. The body is supported on curved dumb irons onto the C springs. The dumb irons extend forwards to form supports for the coachman’s footboard. The shape of the footboard is unusual in that it is completely curved and therefore does not offer a flat surface for the coachman to stand on, it is also served with a leather skirt. Further curved supports are fixed to the underside of the splashboard and onto the underside of the coachman’s seat. A deep leather skirt serves the box seat and the lower section of the double seat rails has a leather covering.

The leather head is supported on curved irons and has a second head of canvas that folds out on external hinges for protection against the sun. The front edge of this canvas head is in wood and it cleverly folds back to be completely concealed when not in use. The doors on each side are hung on concealed hinges with simple oval shaped brass handles. Folding steps give access to the body of the carriage. Mounted on the front C spring is a single step with a plain oval plate. The wheel hubs are jagged. The lamps displayed with this carriage are incorrect, they are made by the Hamshaw of Leicester and are more suitable for the Lonsdale Wagonette on display in the collection. Plain lamp irons are mounted to the underside of the leather splashboard.

The wheels are 12 and 14 spoke English pattern on collinge patent axles, iron shod. Both axles are compassed down. The Barouche is eight sprung with C and elliptic springs. The perch is compassed down to match the profile of the body of the carriage. It has a sharp angular profile at the fore carriage and a gentle curve at the hind carriage.  The splinter bar is also compassed down. There is no brake fitted to this carriage but there is a hook for the attachment of a drag shoe which is missing.

The paintwork on this carriage appears to be black, it may have been very dark green or brown but has discoloured over the years. There is no lining on any components.

One the axles caps: PETER'S AND SONS LONDON

The paintwork has darkened over the years to an almost black making it difficult to decipher the original colour scheme. The leather head has become brittle at the creases.

This Barouche is in the care of the Tyrwhitt-Drake Carriage Museum.