A Carriage Horse in a Stable 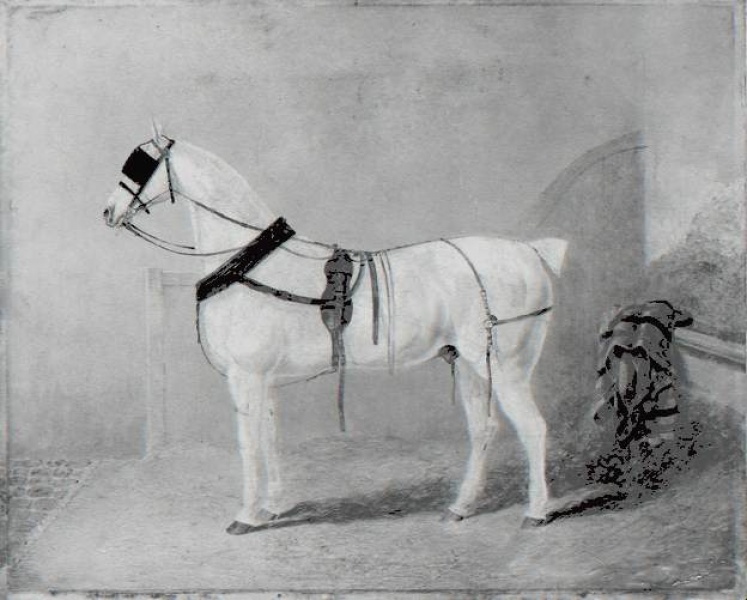 Summary of A Carriage Horse in a Stable

A grey carriage horse stands in a stable harnessed up and ready to be put to a carriage. Painted by John Frederick Herring (1795-1865) around 1825.

The carriage horse and coaching scenes were a favoured subject for the artist John Frederick Herring. Here he depicts a grey horse standing in a stable, harnessed and ready for work. The harness is very much of its time with large square blinkers and a saddle pad that appears to sit low on the horse's back. A wool rug has been slung on the trough to the right.

John Frederick Herring was born in London in 1795. Herring spent the first eighteen years of his life in London, where his greatest interest was drawing and horses. In 1814, at the age of 18, he moved to Doncaster in the north of England. He married Ann Harris and had three sons who all became artists, John Frederick Herring Jnr,  Charles Herring, and Benjamin. His two daughters, Ann and Emma, both married painters.

In Doncaster, Herring was employed as a painter of inn signs and coach insignia on the sides of coaches, and his later contact with a firm owned by a Mr. Wood led to Herring's subsequent employment as a night coach driver. Herring spent his spare time painting portraits of horses for inn parlours, and he became known as the "artist coachman". His talent was recognised by wealthy customers, and he began painting hunters and racehorses for the gentry .

In 1830 Herring left Doncaster for Newmarket where he spent three years before moving to London. In the city he experienced financial difficulties and was given financial assistance by W Copland , who commissioned many paintings, including some designs used for the Copeland Spode bone china.

In 1845, Herring was appointed Animal Painter to HRH  the Duchess of Kent , followed by a subsequent commission from Her Majesty Queen Victoria  who remained a patron for the rest of his life

This painting is in the care of the Walker Art Gallery