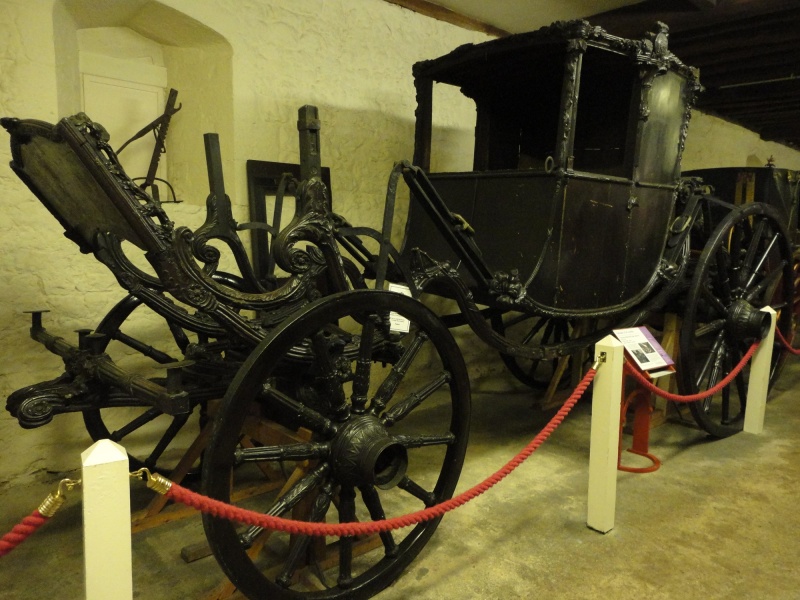 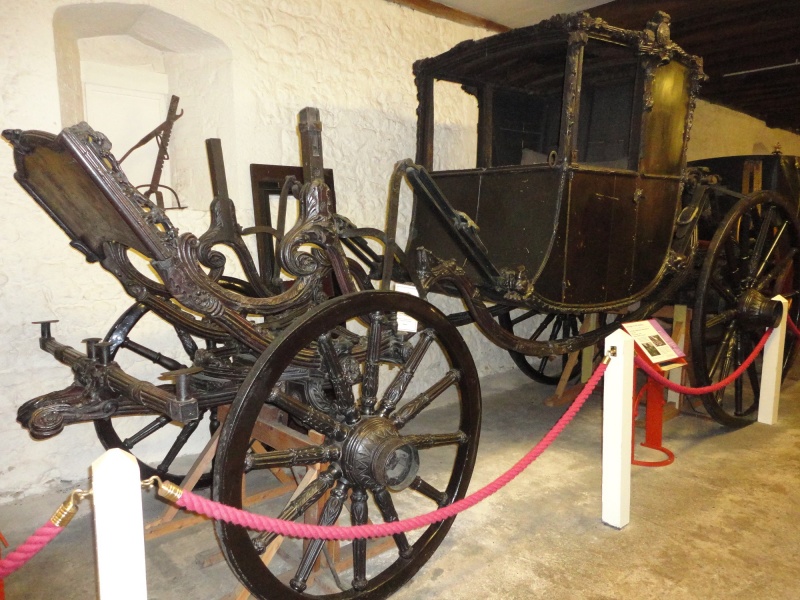 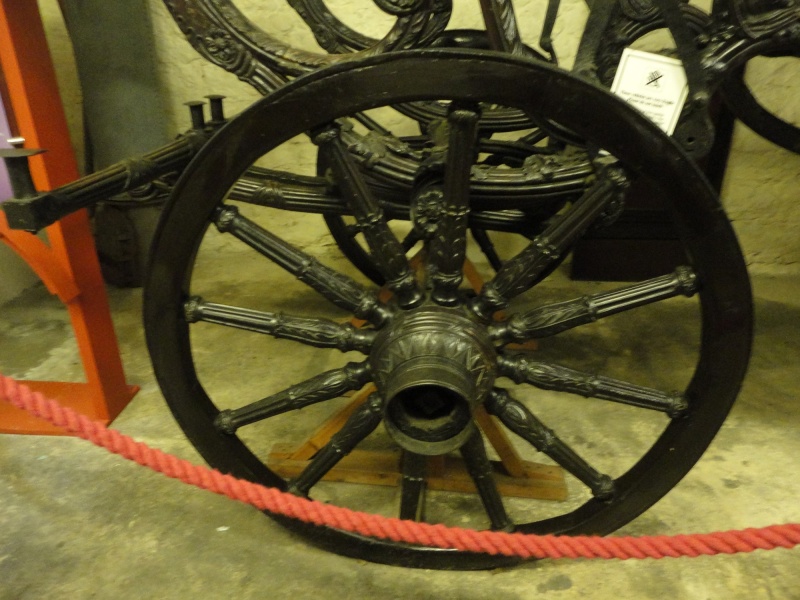 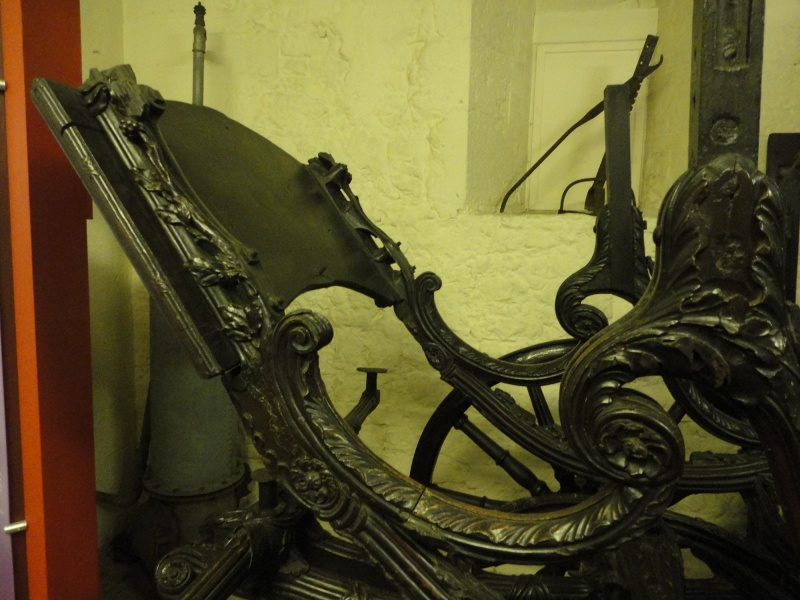 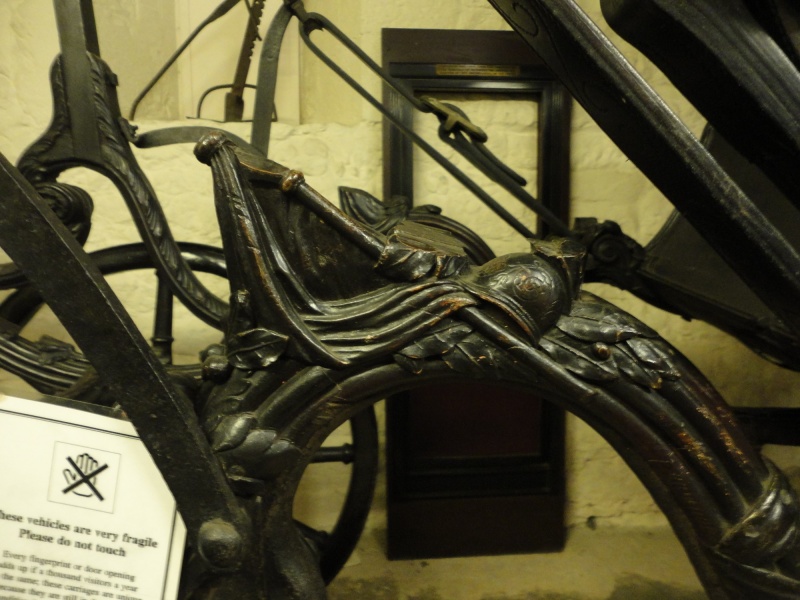 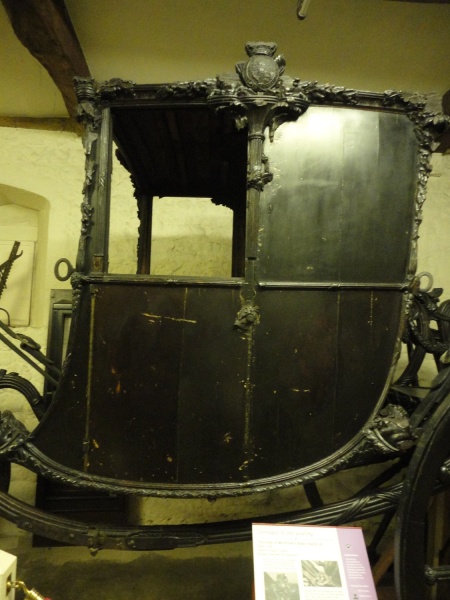 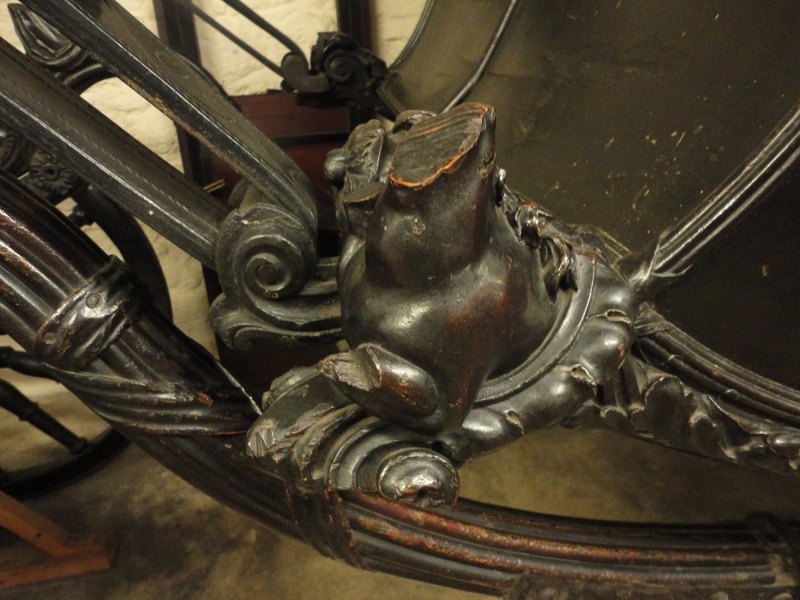 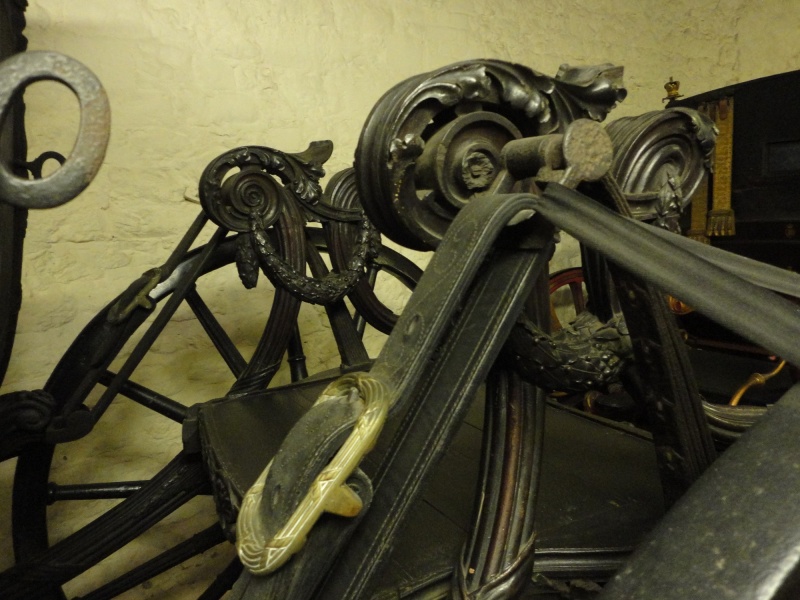 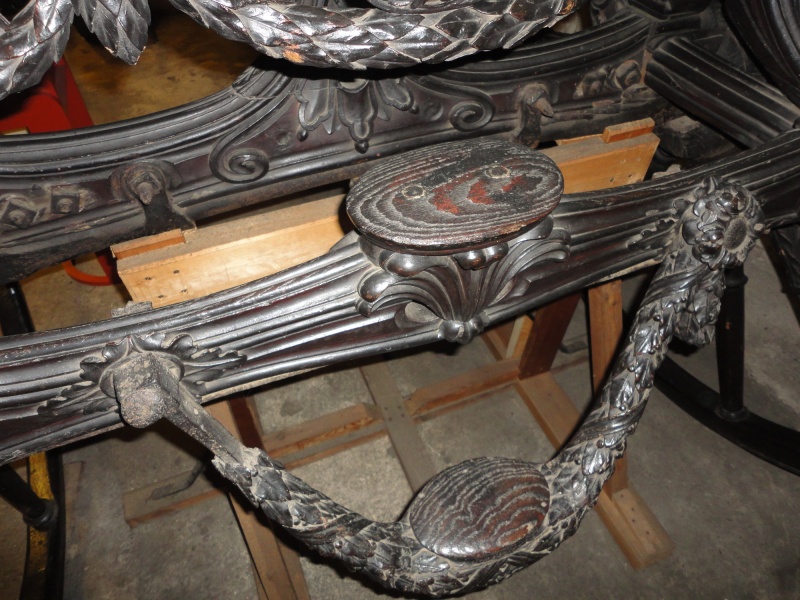 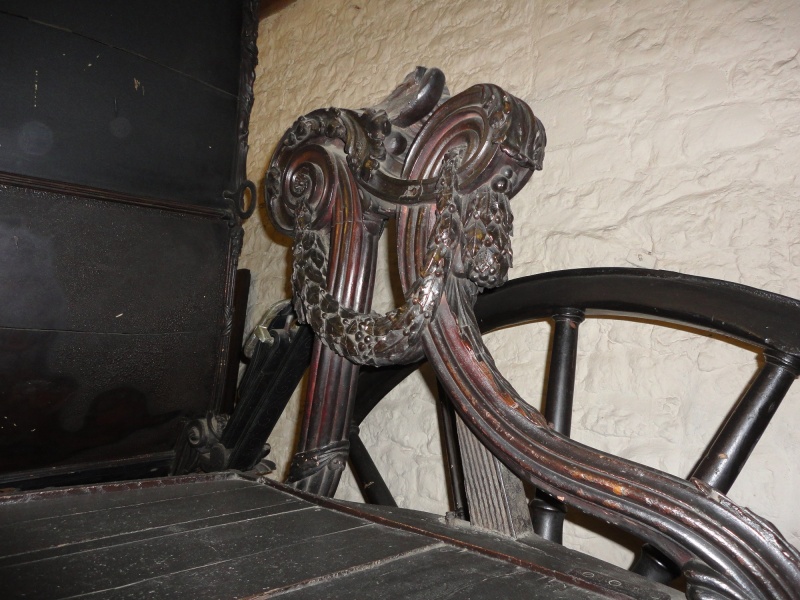 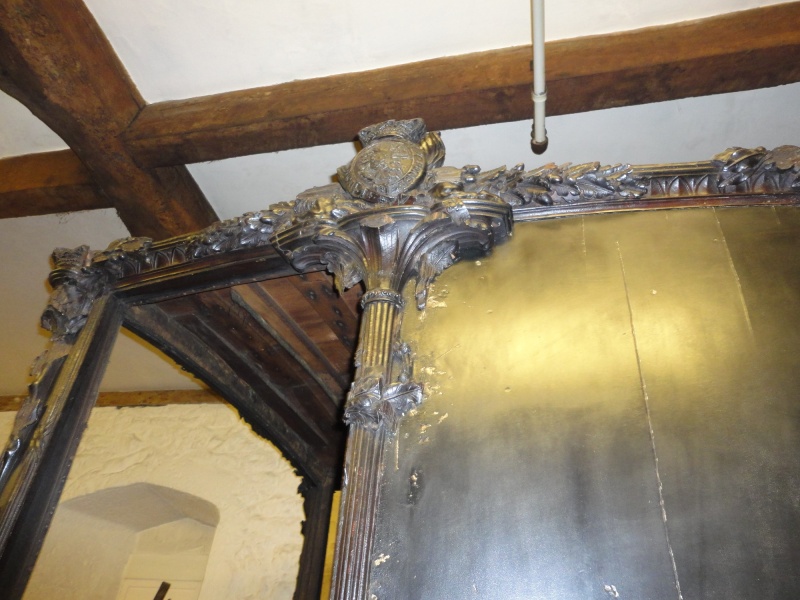 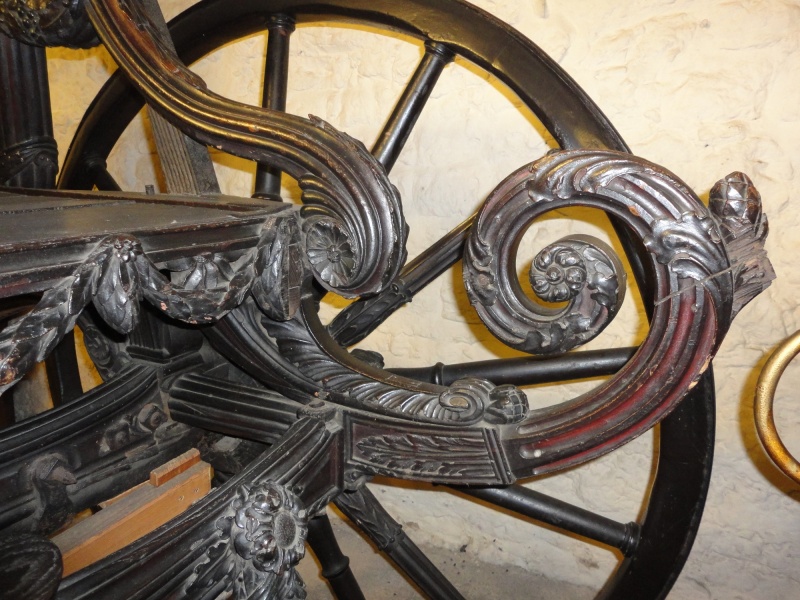 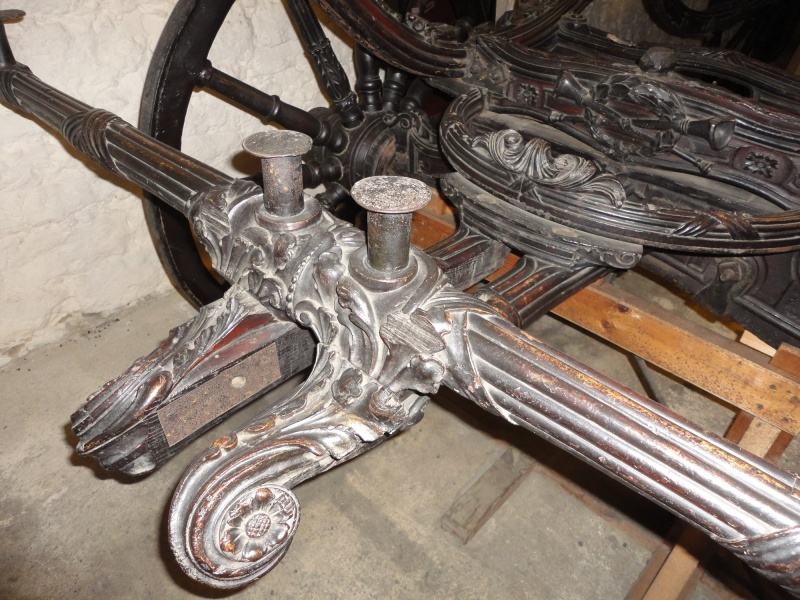 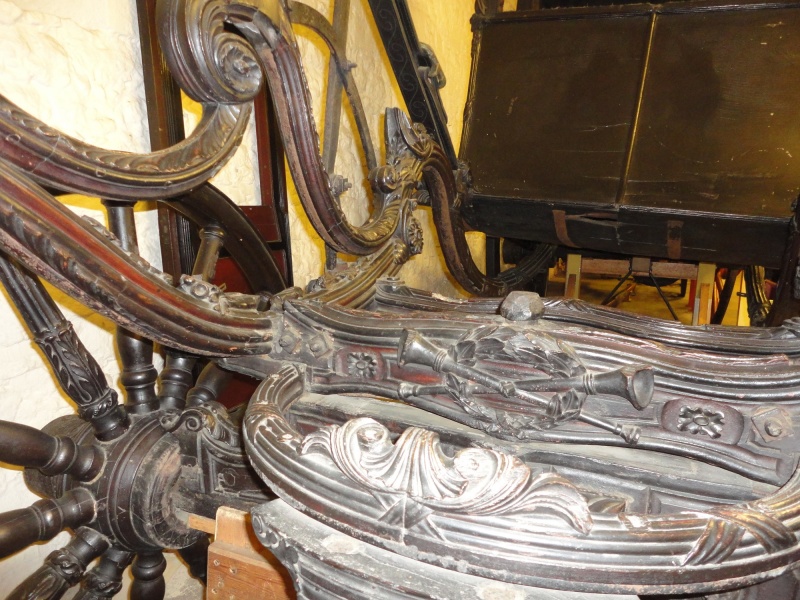 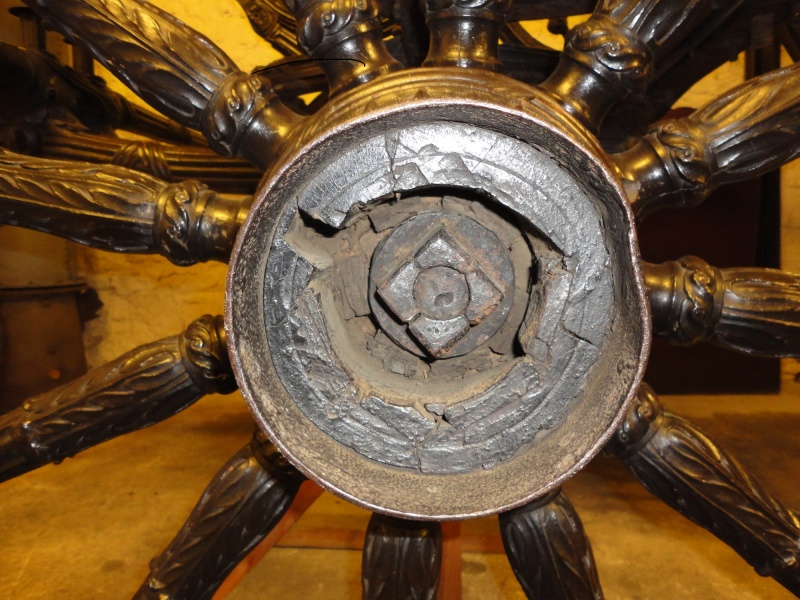 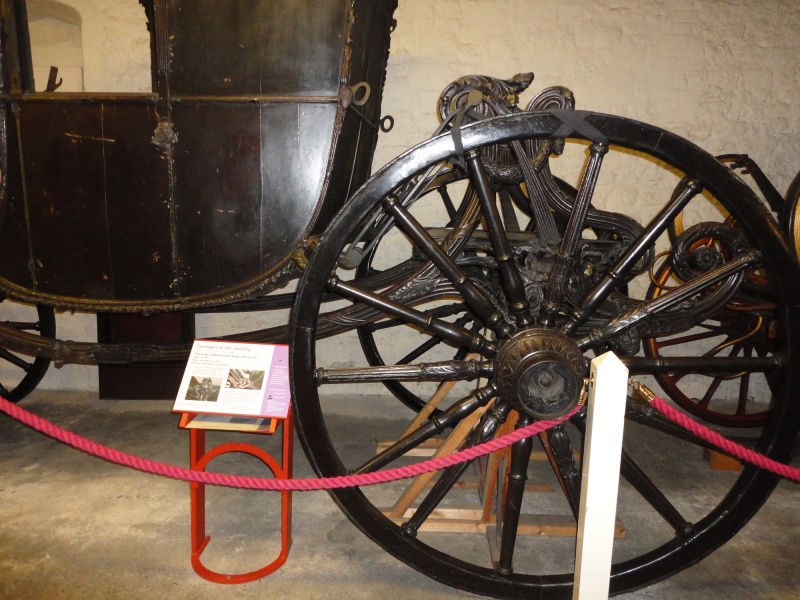 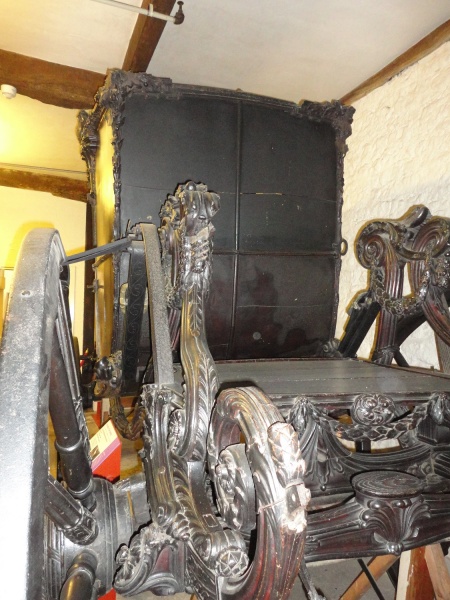 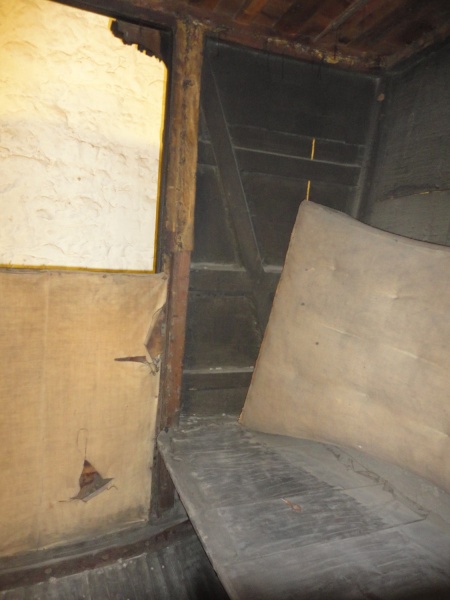 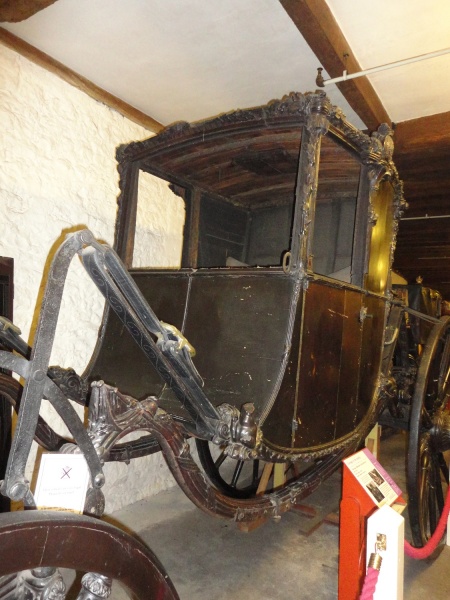 This is undoubtedly one of the most important carriages in the Tyrwhitt-Drake Carriage Museum and is of national importance. Although it is a mere shadow of its former splendour, very few carriage from this date survive and therefore it is rather special.

It was built by John Hatchett of London in the late 18th century.

The carriage was owned by the Royal Household and used by the 3rd Duke of Montrose who as Master of the Horse to King George III. It is of the Berlin style with a twin perch and would have been resplendent with all of its rich carving and once gold and painted decoration.

A magnificent Chariot even in its current state being a shadow of its former glory. Sadly, having been vandalised and painted almost black it looks like a dark monstrosity in the corner, but look beyond this and something rather special emerges. This is a carriage of exceptional quality, of artistic merit and of high social status. Imagine it with its carvings of cherubs and fantastical beasts, covered in gilt and painted with festoons of floral garlands, upholstered in beautiful silks, drawn by a team of horses in harness with gleaming gilt metal furniture. What a truly wonderful sight it would have been.

We now have to use our imagination and think of other similar existing carriages such as the chariot used by George IV in the Hannover Museum, to gain a true sense of the former magnificence of this carriage.

This is a Chariot of large proportions, it was a status symbol. The shape of its body is as one would expect with seating for two facing forwards. Every corner of the body of the carriage is carved with foliate motifs. There are pilasters that fan out into capitals supporting garlands of oak leaves and heraldic devices. The side panels have been pretty much scrubbed bare but there are shadows of the Royal Arms on the door panels, hinting towards an elaborate paint scheme.

The body is supported on hefty leather braces with cast buckles that carry a reed and ribbon design. The leather is stitched with a scroll pattern. Each brace attaches to the bottom corners of the Chariot where there were once a fantastical beasts carved from wood. As with the rest of the figures on this carriage, the torsos are now missing having been sawn off. Who knows how many house have random pieces of 18th century carvings on their mantle pieces that once belonged to this carriage.

Oval metal fittings are attached half way up on each corner for the sway straps (missing).Along the top edge at the back are four cast iron staples for the attachment of footman’s holders.

The carriage has lost all of its upholstery, it is a bare shell. Despite being striped back, it is interesting as the construction of the carriage is visible of a framework and panelling. All window panels are missing. The doors are hung on butt hinges, the handles are missing.

The undercarriage appears to have undergone a fair amount of change over the years. It is a bit of a puzzle. This is a Berlin Chariot, supported on a twin perch. Both perches are so fine and curved in their profile that they hardly look strong enough to hold the fore and hind carriage together. They are carved with the reoccurring theme of reed and ribbon, their ends finishing with high arches at the front, heavily carved with trophies and weaponry. At the back they split with one half sweeping upwards into an extraordinary scroll with acanthus leaf motifs and joining on to the standards that are equally heavily carved. Although they are one carved piece of wood the perch ends and the standards appear joined by a garland of laurel leaves. The bottom split of the perch attaches to the hind carriage.

At the rear of the carriage one can really appreciate the elaborate carving of this carriage. From the bases of the standards, emerge big scrolls embellished with acanthus leaves. The cross bar again is heavily carved and has an oval step on the upper side carved from the wood to access the footman’s platform. The wood platform itself is supported on carvings of laurel leaf garlands and wooden elements carved as fabric swags. Another step is fitted to the cross bar. This hangs lower and is formed of an iron loop encased in carved wood of laurel and ribbon garlands finishing at each end with a floral boss which covers the iron bolts.

The hind carriage is so heavily embellished with carving that one has to hunt the springs as they have been well hidden. The original leaf springs survive at the back but are missing at the front. Here they have been replaced with rather crudely mage iron braces, they would not really function as springs as they are just one piece of metal with no curvature at all.

At the front a little more imagination is required to piece together what was once there. The coachman’s seat is missing. The lower part of its risers are carved with the reoccurring acanthus leaf theme with the upper part being uncarved, clearly intended to be covered by a hammer cloth. There is a strange iron bar bolted to the back of the risers and then on to the perch. This along with the bars that replace the leaf springs at the front seem to be quite old but later additions to when the Chariot was built, and not terribly sympathetic.

The footboard soars up from the fore carriage on supports carved with foliate motifs. A very ornately carved foot support bar is on each side of the footboard. Further heavily carved components sit between the footboard to the seat riser they add strength and artistic merit. The splinter bar is carved with reed and ribbon and sits quite high above the close futchells which have wonderful carved scroll ends.

Many carriages do not retain the wheels they were wheeled out of the carriage works with as they were used and wheels got replaced, sometimes several times each year. This Chariot was a ceremonial carriage and appears to have four wheels dating from the time it was built. They have carved spokes and substantial hubs. The wheels are on common axles and have iron tyres.

Once beautifully gilded and painted, this carriage now looks quite different. It has been painted black from top to bottom. A slight shadow of a Royal Coat of Arms is just visible on the door panels.

Due to the age and rarity of this carriage it is most important that it is closely monitored for signs of pest damage and weakness in its structure. Various elements have been replaced over the years, clearly replacing worn components. A professional carriage conservator recently assessed the condition of the carriage fairly recently and declared most of the components in fair condition. The front and back axles are supported on wooden frames, which is a good thing, taking the pressure off of the structure a little.

All of the original paintwork is lost. There is a shadow of the Royal Coat of Arms on the door panels. If the black paint were ever to be removed then great care should be taken to try to preserve what traces might remain of the heraldry.

The Chariot has been vandalised and parts of the figural scheme are missing.